Plans for the completion of the Birkenhead Docks model 2019

The model, due for completion in 2019, is just under 3m long and 1m wide. The docks will be displayed as they appeared in 1924, prior to the building of ‘Bidston’ dock in 1933. The display will show all of the buildings at that time and will be populated by ships of the correct era plus tugs, barges and lighters.

It is proposed that the model will be supported on three identical sets of drawers, each between 10 and 15cm deep, with Perspex covers, to house the 1:1200 scale ship models of the Museum’s collections. Documentation will be in each drawer describing its contents.

The project is a joint venture by Steve Jones (donating the model, model ships and financing some of the costs), Sean Morris (making of the base plate and three drawer units) and the Museum itself (financing part of the construction and supporting the displays). 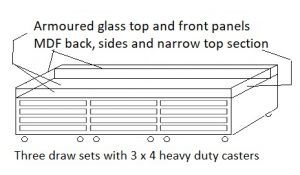 The model will have an armoured glass front section and cover, The solid back section will allow access and provide a display area for information.

Steve will be donating not only the model but also his collection of over 2,000 1:1200 scale ship models which cover ships of all ages and types. In addition there will be models to this same stage placed in the larger model display cabinets (in the shipping room) as a comparative for visitors. This is important as the scales of the builders’ models are different.

The pattern was cut to allow markings out on the 228 x 72 cm MDF board. The elements representing the entrance Docks, Vittoria Dock, the East and West Floats were cut to shape ready for the marking of the 3mm MDF to represent the quaysides.

Marking the outline of the docks:

The outline was drawn from the pattern, ensuring accuracy, then the plan was cut into sections to enable detail to be added at a later stage. The pattern contained numbering for the  buildings of the entrance docks which also appear on the building models. 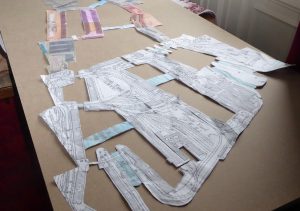 Above is the entrance docks, East Float, Vittoria docks and the Mersey river bank. 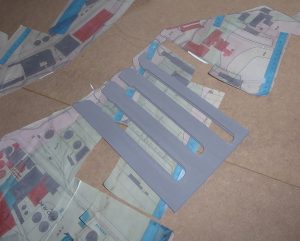 Above is the Mobil terminal area of the West Float and the graving docks. 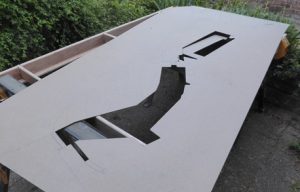 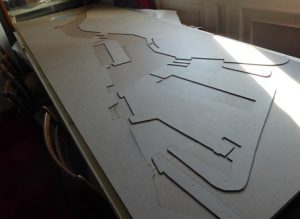 Above: 3 mm MDF, cut out to create the quays is glued and pinned onto the 18 mm base board on 14th May 2019, ready for painting and the addition of rail lines and building positions. 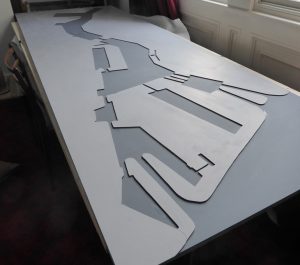 Above: Docks base assembled and painted 15th May 2019 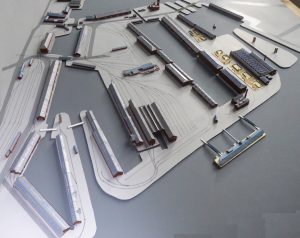 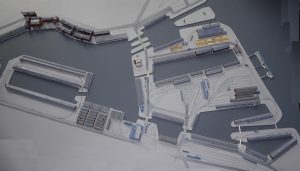 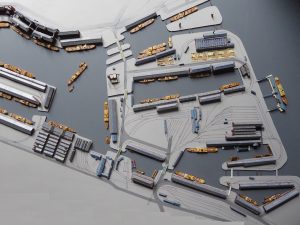 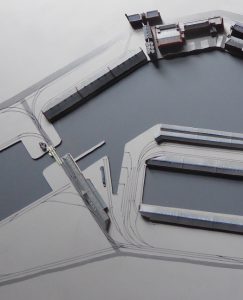 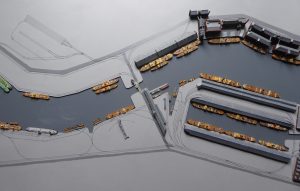 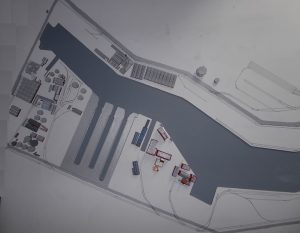 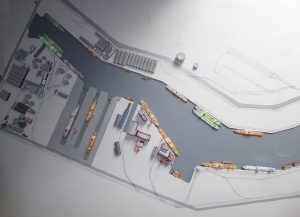