Held on Tuesday 31st January 2006
at the Scottish Mission, Vörösmarty u. 51 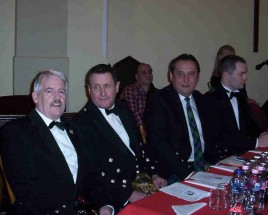 The Little Burns Supper, now called the ‘Burns Est’ has become a traditional event in the calendar of the New English Speaking Union of Hungary. Happily again we were able to run the event at the Scottish Mission on V?r?smarty utca but this time without the support of Ken Mackenzie, now back in the UK.

Despite that there was still a lively atmosphere with Steve Jones as MC and all of the usual elements of the traditional supper. The Selkirk Grace was given by Magyar Zolt?n in Hungarian and Michael Currie in English. Michael, as last year, also addressed the haggis. The loyal toasts were given by Jock MacKenzie, Chairman of the Robert Burns International Foundation who also provided the haggis, cheese and all of the drinks. 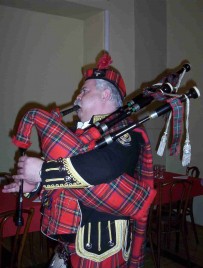 The very short toast to the ‘Lassies’ (ladies) and the reply by the lassies were given by Alan Wilkinson (in a distinctly Liverpudlian accent) and Liana Andrews. The ‘Immortal Memory’, often in the past a wordy speech, was put together by Steve Jones and consisted of several Burns songs performed by himself, Tom Chilton and Nick Shovlin.

No evening would be complete without the pipers and as usual on hand was Kéri György, this time however supported by Németh Miklós who played both the highland pipes and the ‘small’ pipes. The dancing was led by Debbie Moss with Dagda providing the music and there was also a fine performance of Caledonian dancing by the Budapest Scottish Dance Society.

Scheduled to finish at 10 pm the last of the revellers left at 11.30 pm. As a result, the event has raised 60,000 HUF which will go to the Mission. Thank you to all who attended and please put the date 30th January 2007 for the Burns Est next year. 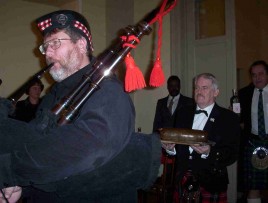 Németh Miklós, piping in the haggis for the first time at the Burns Est.

More pictures from the 2006 Burns Est

The Life of Robert Burns

Robert Burns was born in 1759 in Alloway, Ayrshire in Southern Scotland. Though Scottish he never wrote in Gaelic as his native language was a dialect of English. His father was a tenant farmer so when his father died he became a reluctant farmer working alongside his elder brother. He began to write at the age of 15, a task he preferred to working on the farm. We remember him for his love affairs, which feature prominently in his poetry. As his poetry became better known, the “Ploughman Poet” became a familiar face in Edinburgh Society and he was able to marry one of his former lovers, Jean Armour.

Though famous he was not rich and to make ends meet he took a job with the excise, collecting taxes. He continued to work writing some of his more famous works including “Tam O’Shanter and “My Love is Like a Red Red Rose” until he died of heart disease at the age of 37.

Thousands mourned his passing at the time and millions have celebrated his short but active career as both rake and writer.