After ESU negotiations with the RBIF we will be able to provide funding for the winner as follows: Cost of all travel to and from the competition from Budapest. Full cost of accommodation and subsistance in London and the costs of the ESU programme in London.

Costs not covered are: Travel to and from Budapest within Hungary, overnight accommodation in Budapest if necessary and any personal costs. It would be recommended that participants carry with them around 20GBP per day with which they can cover any personal costs (presents, souvenirs, personal entertainment).

The winner will travel alone from Budapest, flying to London (Luton or Gatwick) on the Monday and will return on the Saturday also from Luton or Gatwick. The chairman of the ESU will be travelling out earlier but will return with the competitor. It is possible for the winner to be accompanied by an adult, however, they will have to cover the full cost of travel and accommodation personally and may not take part in the student programme (Tuesday to Thursday). Naturally they would be able to attend the heats, semi finals and final of the competition.

Local Round in Nyiregyhaza 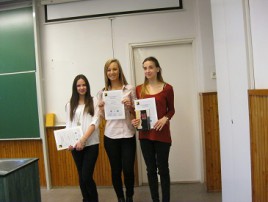 Our plan this year is to complete the competition by 5th April 2013 and the final will be held at the British Embassy.

The BBC event was very successful over the last two years, however it created far too many problems for the organisers. We have decided, however, to keep the junior competition. Therefore …

The BBC have been generous enough to allow the balance of money from their donation last year to be used for the 2013 and 2014 competitions. Unfortunately the money is tied up in the RBIF, however, we have requested its release to my company, Stadminco, which has organised the competition, free of administration costs, over the past years. When the money is received we will let everybody know, however, we will ensure that the winner will be travelling to the UK in May for the International Final.

We will provide prizes, certificates and medals as usual to the top 3 in each competition.

The ESU International Public Speaking Competition has now been running for 32 years. When the IPSC started, it was an international tournament between England and Australia only. Today, the competition reaches over 40,000 young people in around 50 countries across the globe. Recent winners of the competition have included Mauritius, The Philippines, Yemen, Lebanon and South Korea.

The purpose of the IPSC is to bring together the best speakers from all over the world for a week of international cultural exchange. It showcases the very highest standard of public speaking from around the world, while giving delegates an opportunity to meet and engage with other young people of different backgrounds and cultures.

IPSC 2013 will run from Monday 13 May 2013 – Friday 17 May 2013. The programme for the week will be made available closer to the time, but will include debating and public speaking workshops delivered by world class coaches and mentors, a number of educational and cultural trips and excursions in London, as well as the heats, semi-finals and grand final of the competition.

The 2013 handbook is now available to view online and download. The handbook contains the dates and themes for IPSC 2013, the rules of the competition, an explanation of the competition structure and comprehensive guidelines and tips for speakers and adjudicators.