In honour of the ‘bard’ Robert Burns 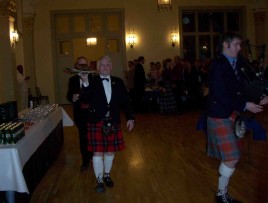 Left: The haggis enters with Neil Johnston the piper, Steve Jones carrying the haggis and Aaron Stevens the whisky.

With Masters of Ceremonies Steve Jones of the ESU and RBIF and Aaron Stevens the new minister at the Mission the event kept moving at a lively pace. Naturally the evening was opened by the two pipers, Neil Johnson from Scotland and Kéri György from Budapest.

All of the traditional elements were there and the ‘Selkirk Grace’ was given by Aaron Stevens with the grace in Hungarian from Magyar Zoltán, Founder of the Robert Burns International Foundation. 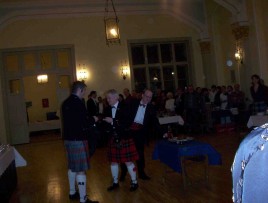 The traditional ‘Address to the Haggis’ was given by Neil Johnston of the Shotts and Dykehead Pipe Band, who had stayed over after the ‘big Burns’ at the Corinthia Royal for the purpose. The Immortal Memory was presented in English by Debbie Moss with a translation in Hungarian projected onto the wall. With Burns poems by Ott? Pecsuk and David Walker and songs from Hugh Conway Morris and Tom Chilton the flavour of Burns was well in evidence.

The high point of the evening was the appearance of Bob Hage, the Canadian Ambassador and his wife Jean. Bob’s ‘Toast to the Lassies’ and Jean’s reply were witty and very moving at the same time. The audience listened in wrapped silence.

To finish the evening the Budapest Scottish Dance Club gave a second display, having danced whilst the guests consumed their haggis. The conclusion of the evening was Dagda, the band, and Debbie Moss, as caller leading guests in traditional country dancing. The official part of the evening finished with Auld Lang Syne, though the dancing continued well into the night.

We have to thank the many sponsors who made this possible, particularly the Robert Burns International Foundation who provided all of the drink and the haggis. Jock MacKenzie, Chairman of the RBIF and a regular supporter of the little Burns, (Marlix) was unfortunately unable to attend due to illness but he sent his good wishes (and the haggis – a personal gift). Zoltán Magyar, President of the Hungarian Scottish Society, provided the palinka – and very good it was too.

The table coverings and serviettes were donated by DUNI, distributed in Hungary by Beltex Kft. www.beltex.hu