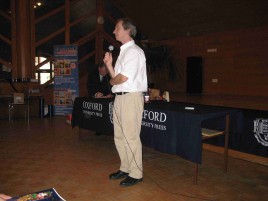 Ben Wetz, writer of the Adventures Series, once again presented the plenary sessions, particularly focusing on motivation in the classroom.

Ben managed to maintain his own interest in his sessions throughout the long week of conferences. Though the theme and much of the content were the same the small differences meant that the audience was well focused throughout.

Steve Jones was supporting in his dual role with ‘Singlish’ and as Santa Claus. In addition he acted as Master of Ceremonies for much of the conferences. 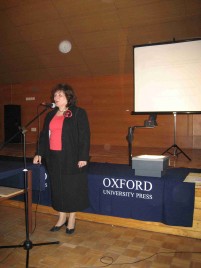 Jobbágy Ilona as the OUP number 1 in Hungary was involved in the organisation of each of the events. It’s thanks to her that the conferences are put on and we all hope that they will continue long into the future. 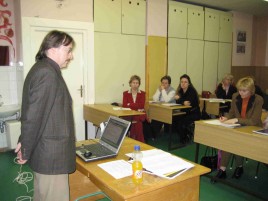 Kelemen Ferenc was the third member presenting at each conference. Feri is a full time worker from OUP and most teachers will know him from the many workshops he has conducted, particularly relating to the new examinations. Here he is looking very serious before his presentation – which was, in fact, far from serious!

Pictures from the Miskolc conference