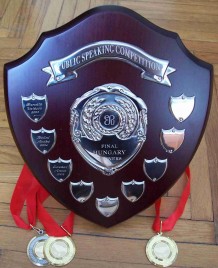 Pictured left is the trophy bought by the New ESU of Hungary for the Final of the Hungarian round of the Public Speaking Competition. The first in the ‘open’ and ‘home’ categories and the overall runner up also receive medals.

The main prize (for the first two) is participation in the International Final in London on May 19th 2006. The ESU Essex (UK) branch has provided £500 to cover the costs of participation of the two winners in London.

Prizes for the final were presented by two of our sponsors Csizmár Mónika of Oxford University Press and Könyves Katalin of Logmans. Prizes were also provided by Vanik Petra of MacMillans who could not attend. 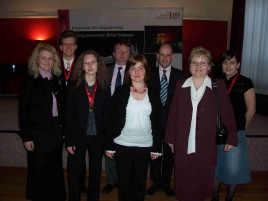 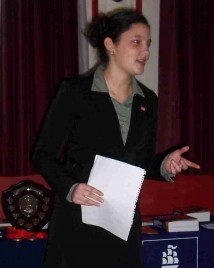 Anastassia Fagan (pictured left during her presentation) from the United States and at present an exchange student at PTE Babits Mihály Gimnázium és Szakközépiskola, Pécs, completed an excellent afternoon by giving a presentation to the same title.

Unfortunately Anastassia was unable to participate in the competition proper under the competition rules which require a Hungarian native speaker to represent Hungary in the finals in London.

Her performance was exceptional and both the style and content were of the highest standard. As a thank you, Oxford University Press presented her with the latest edition of the Advanced Learner’s Dictionary.

It was unfortunate that the Ambassador, Mr. John Nichols, patron of the New ESU of Hungary, was delayed at another event and was unable to get back in time for the presentations. We are, however, very grateful to the Embassy once again for their support and the use of the Embassy.

Simon Wilson, interviewed after the competition had been completed, whilst praising the effort put in by the contestants who were of a very high standard, was concerned that the term ‘global’ seemed to have been too heavily associated with ‘the environment’ and that economic and political ‘globalisation’ seemed to have been neglected. Despite this he was full of praise for all of the contestants who had shown themselves capable of working with the language at a very high level.

The Finalists
Photos from the Final
In the gallery above the contestants appear in the order below, that in which they made their presentations. If you wish to receive the full size jpg image e-mail Steve Jones at stevejones@t-online.hu