I am certainly struggling to find information on the history of the town though, from this map of 1852, it would appear that the settlement of Hűvösvölgy was indicated by zum kühlen Thal, the German equivalent and was restricted to occasional individual buildings. Linden B is clearly Nagy Hárs-hegy, Hotter Bergl appears to be Fekete Féj, Johannes Berg, János Hegy and schone Schaferin, Szép Juhásné. It is clear, at the time, that the area was not well developed, as can be seen from the example of the centre of Pest (Pesth) and Buda (Ofen) below, from the same map, where housing can be clearly seen.

It is clear from maps at the time that by 1944 the settlement was established with its roads much as they are today (2020). Ördög Árok, the stream, runs down through the plots between Máriaremetei út and Ördög Árok utca in an open channel, out towards the channel behind the buildings opposite the tram terminus, following the tram line eventually emerging from the Danube bank. 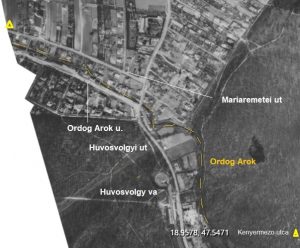 Air photo of Hűvösvölgy in 1944

The Approach to Hűvösvölgy Terminus 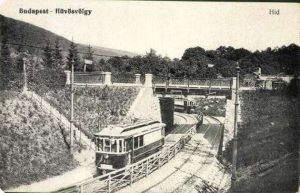 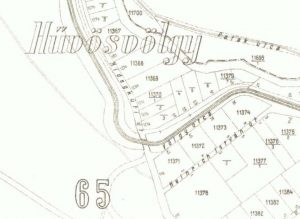 Photo taken in 1918 shows the Bridge over Hidegkúti út (now called Hűvösvölgyi út) at Völgy utca. Völgy utca runs parallel to the tram line on the opposite side of the bridge before turning left towards Heinrich István utca and Völgy utca tram stops. The map of 1937 shows the bridge area approaching the tram stop to the north.

The photo (postcard) below shows the section of the tram 56 route as it turns under Hidegkúti út (now Hűvösvölgy út) towards Heinrich István utca tram stop. This appears to have changed little since the 1930s. The far tram is just disappearing under the bridge. 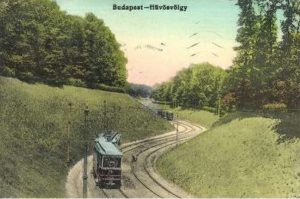 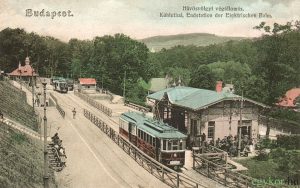 These photos, above and below, appear to show the terminus building under construction in the 1920s (possibly 1923). At the far end would be the turning circle (nowadays where the buses turn into the interchange), on the right Hidegkúti út and to the left the ground rising up the hill where there is now a car park. 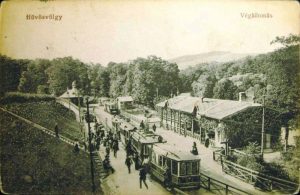 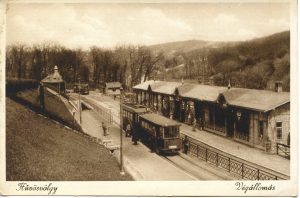 Postcard of the terminus in the 1920s showing the completed terminus with the subway out to Hidegkúti út. 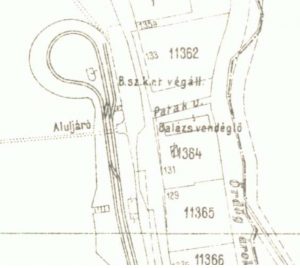 A portion of the official map of 1937 showing plot allocations with the plan of the terminus of tram 56. Note the Balázs Vendéglő

The terminus of the tram line 56 in Hűvösvölgy, at this time, had a loop end similar to the arrangement today at St Janos Kórház. The horse trams 58 and 56 came into being around 1869 and were electrified 27 years later just before the millennium. Tram 58 – or 81, 43 – was closed in 1980. 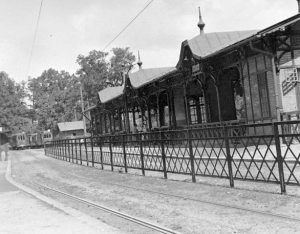 The site of the vendéglő can be seen on the above map showing the terminus of the 56 tram, opposite the underpass (aluljáro). It was opened in 1838 in place of a 18th century ‘kocsma’. The last building on the site was built in 1979 but was closed in 2004. 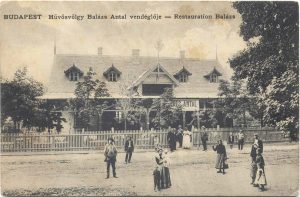 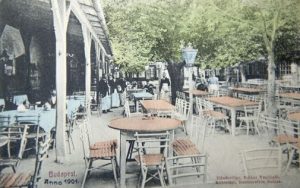 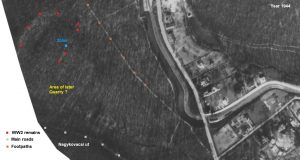 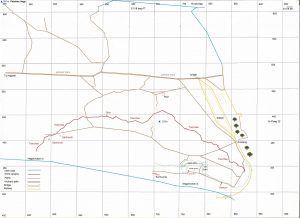 The two maps above, one produced by the Hungarian Air Force in 1944 and the other by myself in 2020, cover some of the same area around a small hill height 255m in the forest above the centre of Hűvösvölgy.

On the aerial map we can clearly see the road approaching Hűvösvölgy. There is no Childrens’ Railway (‘Pioneer Railway’ built in 1949) but a path lines up with the present path which passes behind the station. Nagykovácsi út can be seen at the bottom of the photo and the hill, in military terms, overlooks both main roads. There are signs of stone structures on the hill marked by the red dots. Today, in this area, we can see a set of trenches and earthworks. The building of the railway and the main road to Nagykovácsi has destroyed the lower parts of the hill to the east and south. The north and west appear undisturbed.

The Russian armies came through Budafok from the south-west on the Buda side. It is unlikely that the trenches, whilst set up, were never used. It would, however, be an important position to fortify to cover the two routes – from Budakeszi and Solymár – from the north-west into the centre of Buda and the Castle district. The hill, provided with suitable anti-tank weapons, for example the 88mm guns, would have covered both roads. An investigation of the trenches, therefore, is unlikely to discover anything of danger but might well still hold information which could illuminate the era.

The structure of the northern edge of the hill is clear and there was probably already some scatter of rocks but there is a clear correlation between the aerial photo and the centre of the trench system on the northern side of the hill. The railway clearly cuts the trenches on the small path beyond the crossing on the west side of the tracks, half way to the viaduct and bridge.

To be confirmed is the date of the opening and closing of the quarry which does not appear on this photo. This area on the south side of the hill has been heavily modified. The station building and several houses in Ördög Árok utca use the material which we know came from this quarry. As the aerial photo indicates no quarry, I would suggest it was opened between 1945 and 1948 to provide building material for the railway and new houses. The quality of the stone is not the best so it probably closed around the 1960s.

Modern satellite image showing the visible remains and the quarry

Created by Steve Jones 2020. If you read this and have more information or corrections I would be glad to receive them.