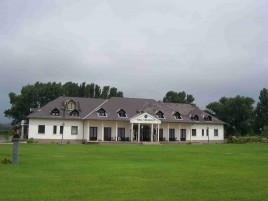 Eighteen students, mainly from Szentes and Csongrad with a group also from Budapest attended this one week camp at Lakitelek, near Kecskemét. The staff consisted of three Hungarian teachers (from Szentes and Szeged), two native speakers from the UK and Steve Jones. Other assistants, all volunteers, assisted with the running of the camp. 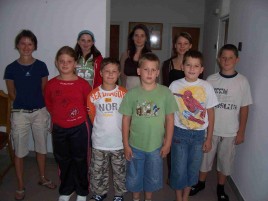 Students were taught in three groups with four lessons each morning and activities in the afternoon. Each day they started with their Hungarian teacher followed by lessons with Kate and Louise the two native English teachers and Steve Jones (Pista Bacsi). 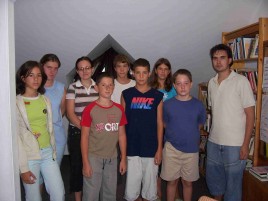 Students with all levels of English attended and appropriate materials were selected so that all of the students could achieve to their maximum. The main focus was communication – speaking rather than writing – vocabulary, listening skills. In many cases this was the first opportunity the students had had to speak ‘live’ to a native speaker – one to one. 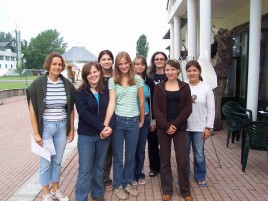 These students were able to converse easily in English. Their understanding was generally of a very high standard but they needed to develop their speaking skills. At the same time the camp was supposed to be fun and it was, despite the best attempts of the weather to disrupt things. 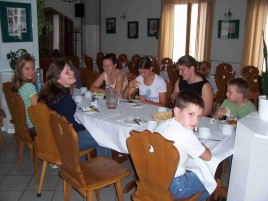 Breakfast in the Dining Room

The restaurant provided three meals a day, all of a very high standard. Meals times were an opportunity for the students to relax. Rooms too, generally for two, three or four were all well appointed and ‘en-suite’, clean and comfortable. There was a small buffet where students could buy drinks, ice cream etc. 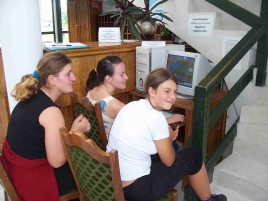 The students were able to take advantage of free internet access during their free time. There was also a table tennis table, chess (outside) and a swimming pool with sauna (500 Ft). 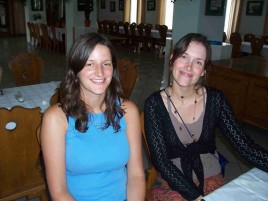 The two native speaker volunteers come from Kings Langley and Abbots Langley near Watford (north of London). Kate works at Oaklands College, St Albans in animal care and Louise is a nursery organiser in Radlett.

Students at the Campfire

A regular feature of the camp was the campfire in the evening, beginning around 9pm and continuing late into the night. 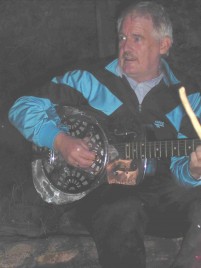 Steve taught a variety of English language songs in the mornings and in the evenings the students could enjoy singing both those songs and others. Common songs such as ‘Drunken Sailor’, ‘Skip to my Lou’, ‘Ten Green Bottles’ and ‘This Old Man’ were well known to everyone and each group had its own favourites. 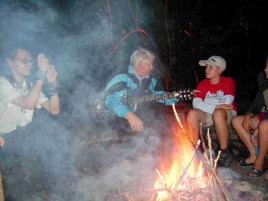 Songs by the Beatles were popular – ‘Imagine’, ‘Hard Days Night’, ‘Yesterday’ and ‘Twist and Shout’. There were also some new additions such as ‘Rock around the Clock’ and ‘See you Later Alligator’ from Bill Haley and ‘California Dreamin’ from the Mammas and the Pappas, which became very popular too.