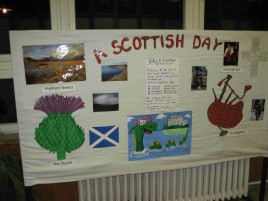 Steve performed for the children from several Primary Schools in the Tatabanya area who were taking part in a competition on Scotland. Steve was representing the Robert Burns International Foundation of which he is General Secretary. www.rbif.org

The school also sent entries from several students for the Robert Burns Competition.

Images of the Competition