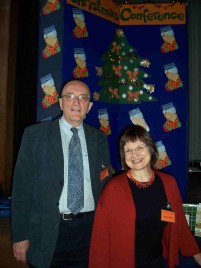 The conferences organised annually throughout the country were held this year in Miskolc, Debrecen, Szeged, Pécs and Budapest.

The main guest speakers were Peter and Karen Viney who have just completed three books in the series ‘In English’ for OUP and hope to extend the range to the higher levels in future. Peter was also one of the co-writers of ‘Streamline’, a very popular series which has, unfortunately, only been updated for the American market (in the 1990s). Peter and Karen looked at the history of English teaching over the past 500 years or so, though they concentrated on the last 40 years (for obvious reasons). Their extremely amusing dialogues in the second plenary session had the whole audience in raptures. They certainly maintained the high standard set by Clive Oxenden in 2004 and Tom Hutchinson in 2003.

Also appearing at each event was Steve Jones (Santa and Christmas Songs) as in previous years. Jobbágy Ilona and Kelemen Ferenc with the team from OUP put together an interesting programme of plenaries and workshops taking Christmas as the central theme.

At each event there were different local speakers who provided a huge variety of activities of all kinds.

The first four conferences were attended by around 100 to 120 teachers but the final event in Budapest was huge, the biggest yet, with over 800 signed up beforehand and an attendance of well over 550.